David and Bathsheba is a 1951 historical epic film about King David made by 20th Century Fox. It was directed by Henry King, produced by Darryl F. Zanuck, from a screenplay by Philip Dunne. The music score was by Alfred Newman and the cinematography by Leon Shamroy. King David was the second king of Israel and this film is based on the second Old Testament book of Samuel from the Bible. Gregory Peck stars as King David and the film follows King David’s life as he adjusts to ruling as a King, and about his relationship with Uriah’s wife Bathsheba (Susan Hayward). It was shot entirely in Nogales, Arizona. Goliath of Gath was portrayed by a Polish wrestler named Wladyslaw Talun. 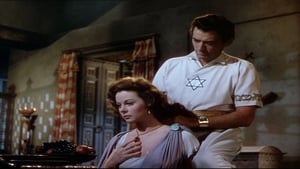